Business Flying to Japan and the Far East 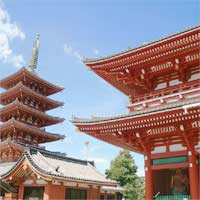 Flying on business from the United Kingdom to the Far East is a lot less onerous than it used to be now that direct non-stop flights are available to most of the major cities. For the moment though the only direct flights out to this region are from London, although with the growing importance of China as an economic powerhouse it surely can’t be too long before direct flights from other cities in the UK become viable.

Where Can Business Flyers Travel to in the Far East?

The main airline hubs in the region are Hong Kong, Tokyo and Osaka in Japan, Shanghai and Beijing in China, and Taipei, the capital of Taiwan. All are served by direct flights from London and can be used to reach other locations by regional or internal flights depending on the business traveller's final destination.

The main problem for business travellers to this region is that, with the exception perhaps of Hong Kong, which is a major air hub for almost everywhere and everyone, the flights going from London to cities in the Far East are for the most part full of business travellers. Why is this a problem? Well, perhaps it isn’t for the business travellers themselves but it's a headache for their finance directors, as this means there's no pressure to lower prices to attract people who pay their own way (i.e. tourists).

On the other hand, many of the airlines that travel to this region, and are based there, have historically had good reputations for customer service and there's no evidence that has changed. So business travellers often enjoy travelling to the Far East, or, perhaps more likely, find it more endurable than flying some other long-haul routes and airlines.

Many of the airports in the region are also pretty spectacular. Both Beijing and Hong Kong have had impressive, airy terminals built recently, designed by international renowned Sir Norman Foster. In fact in the case of Hong Kong it was a whole new airport Taipei constructed a second terminal during the early years of this century and is starting on a third, Seoul in Korea opened its new international airport in 2001, and Shanghai in China has a new airport which was opened in 1999.

Business travellers flying into Japan are the (relatively) unfortunate ones. Osaka is served by an airport opened in 1994 and although it has just opened a second runway, the associated plan for a terminal to go with it has been shelved for the moment.

Tokyo's main international airport has to limit the number of flights for each airline and it is likely that the situation will only be relieved when expansion at other nearby airports takes more of the domestic and regional travel away. Tokyo airport is also a long way from the city centre with train journeys taking an hour and road journeys often longer, depending on congestion.

Don't Get Caught Out

One change that could confuse the seasoned business traveller in the future is that the Chinese authorities are trying to get the three letter code for the airport in Beijing to be changed globally. It is still usually referred to as PEK outside China, derived from the capital city's former anglicised name Peking, and the authorities, who use BJS internally, want this recognised outside China.