Home > Flying for Business > Flying at the End of the Next Century? 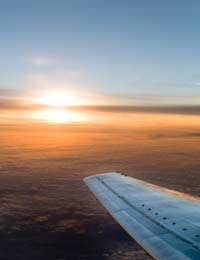 A major European airline recently asked industry experts what they thought the business traveller would experience when flying toward the end of the next century and the answers were varied to say the least.

Ecology and the Business Traveller

The ecological impact of commercial flight was discussed a great deal but predictably, none of the experts thought that there would be no flying at all. Despite the environmental objections, the genie is unlikely to be put back in the bottle.

With one estimate of 5-10% annual growth in flying miles and another of airline traffic generally doubling every ten to fifteen years, the challenge is seen as making more efficient engines, with different fuels, and different aircraft forms.

It seems unlikely that industry experts take seriously the threat of telecommunications technology. It was considered that business will become more global and that meeting face-to-face would still be important enough to make video-conferencing, Internet seminars and the like adjuncts to flying rather than replacements.

The consensus was that the shape of aircraft will remain broadly similar for the coming decades with attention being paid to stronger but lighter composite materials for the structure of the aircraft and greater use of electronic controls to eek more fuel out of the engines. It is anticipated that toward the end of the century we will see radical shapes that are aerodynamically more efficient and hold themselves up in the air better than today's shapes.

This in turn means that they will require less fuel. Shapes are expected to evolve that are more like flying wings, with the whole body of the plane contributing to lift. These will provide larger spaces than the confined tubular fuselages of today, allowing the business traveller to stretch out and exercise more easily.

The growth of nanotechnology is expected to deliver more slippery surfaces and perhaps surfaces that change throughout the flight, ultra-smooth at cruising height then roughening up to increase drag on landing. There are likely to be solar cells on the top surfaces that provide electrical power so there's less of a load on the engines.

Another off-the-wall prediction is that computation would have advanced so dramatically that aircraft will be able to determine wind speeds and air currents at various heights and locations. They will then be able to adjust their flight paths dynamically to take advantage of beneficial air movements, increasing fuel economy once more.

The size of aircraft will continue the upward trend to lessen the ecological cost per traveller and some designs are expected to hold up to two and a half thousand passengers. But this will put pressure on airports to increase capacity and throughput, otherwise the business traveller will be having a very stressful time toward the end of the century.