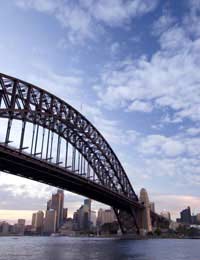 Long distance planes have opened up the antipodes to UK-based business travellers with the ability to take direct flights to all the major cities of the Australasian region. Australasia is generally considered to be Australia, New Zealand, Papua New Guinea and the islands included in that area but for business travel the focus has to be Australia and then New Zealand.

We also need to be clear about the term 'direct' flight. This is used to mean a flight on one plane, so you don't have to change planes or stopover Often when people talk about direct flights they actually mean non-stop flights, where the journey is done all in one go.

It's worth pointing out that there's a lot of route sharing on long haul flights and that you might think you're flying with one airline when in fact the plane will be operated by another. So it’s sometimes a bit of a moot point as to whether a flight can be termed direct or indirect.

Sadly the ability to fly non-stop to Australia for business simply isn't there yet, but commercial airliners that can make the trip already exist and it won't be long before they are in frequent use. You can be sure that in a few decades time business travellers will be looking back at our time and shaking their heads in wonder at the thought of having to get from one side of the world to the other in two hops.

Looking at routes served by direct flights, the vast majority are flying around the world in an easterly direction with stopovers at the major airline hubs in the Far East, at Hong Kong, Bangkok or Singapore. If you are happy to change planes (and to be honest, you generally have to get off a plane for a stopover, even if it's only for a few hours, so does it really make much difference?) then there are options to stop in the Middle East, at Dubai or Bahrain, or at other points in the Far East like Mauritius or Kuala Lumpur.

It is possible to get direct flights that go in the other direction, usually stopping off in LA or San Francisco, which may well suit business travellers with business to do in America rather than the Far East or the Middle East.

It also depends on your final destination. Sydney, the business hub of Australasia, is the best served city in the region but flights are available to Auckland on the North Island of New Zealand and Christchurch on the South. Back in Australia, Melbourne and Perth come second to Sydney and there are a few airlines flying into Brisbane too.

The main point about air travel from the UK to Australasia on business; it's such a long journey that it makes complete sense to tailor the trip to make the stopovers work for you by having other meetings or making other business contacts. Once the decision has been made to make the trip, the knock on cost of a couple of nights in a hotel somewhere is a negligible increase and if it leads to more business down the line then so much the better.

If the stopover allows a few days for rest and recuperation, then that defiantly works for the business traveller. The employer, in theory, gets a refreshed employee back at the helm in good condition too.