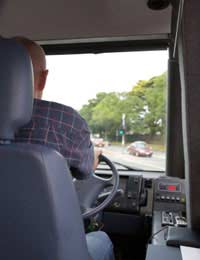 Coaches and buses don't often come under the sweep of the business traveller's radar. For many people they combine the worst of both worlds; they are slowed by traffic congestion, unlike trains, but you don’t have any control over where they go, unlike driving a car. But there are some specific instances when they can deliver a valuable business travel service.

Coach and Bus Compared to Rail

The most obvious advantage of coaches and buses is that they tend to be cheaper than trains in route for route comparisons. The advantages of trains is that they are usually much faster in getting through urban and city areas and you don’t have to worry about parking. A coach on the same run may be slower, but not appreciably so, and can cost a lot less, and you still don’t have to worry about parking.

A good example of this is the Oxford to London route. An express train takes a little over an hour and the coach is timetabled to take an hour and twenty minutes, although it varies greatly depending on the time of day. But the cost of the bus can be less than half the train fare, although of course it depends on the ticket type, available deals, time of day and all the other variations, for both services.

For people running small businesses, or perhaps working for themselves, that price difference can be significant. On similar runs in the UK where the coach is significantly cheaper then a sole trader or small company could make big savings over a period of time by picking the bus, as long as they can work around the uncertainty over journey times.

Business Travel Where No Trains Go

Another example where a coach service can deliver is if there is no equivalent train service. This is the case in more rural parts of the country, or where the train service radiates out from a large urban conurbation and the journey that's required is one that goes across those radial lines. In that situation a coach could do the job but it's more likely that a business traveller will drive. A coach on A-roads is not that comfortable to work on so that advantage is largely lost.

One area where this does work is linking between airports. If a business traveller is arriving from one London airport and needs to take a connecting flight from another airport then the coach is the only real alternative. Hiring a car is too time-consuming for a short journey like that and a taxi is only for the rich and famous. There are no rail links between any of the airports, they all go in and out of London instead, so the coach fits the bill perfectly.

Bus and Coach as a Transport Link

Linking between transport systems is another one. Until 1999 Luton Airport did not have a train station and so a shuttle coach to and from Milton Keynes station, where fast trains go to and from Euston, was a real bonus. This is not so true now that Luton Airport Parkway was opened, although the service is a rather slow one into St Pancras. But the shuttle to Milton Keynes lives on, giving access to fast trains north to Birmingham and points further north, west and east.

This is an excellent example of the flexibility of a coach service to slot in to fulfil a need that would be too expensive to satisfy with a new rail service.