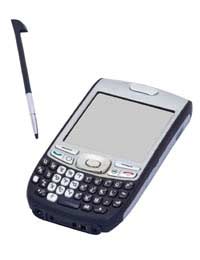 Smartphones are rapidly eclipsing PDAs they get more powerful and capable, but has the balance tipped to the extent that a smartphone can replace a laptop?

Many business travellers would jump at the chance to be able to leave their bulky computers back at the office and the evolution of the smartphone is moving toward that. All smartphones now come with applications that allow them to read and write standard spreadsheet, document and presentation formats. With high speed data connections and Wi-Fi they can link to the Internet from almost anywhere too.

It's the usability of these smartphones that makes business travellers think twice before they rely on them as their sole computing tool on a journey. The screens and keyboards have to be small so the main business use of a laptop, reading and writing information, isn't all that easy on a smartphone.

But there are accessories that can help, at least with the keyboard problem. Folding keyboards with bluetooth interfaces can be brought along on a trip. You probably wouldn’t want to get one out during a meeting to check an email or get a contact, but it could be used in the hotel or on a train to type up meeting minutes or amend a presentation. Combine this with a desktop stand for your smartphone and you have base of operations.

Neat devices started to came onto the market recently that project an image of a keyboard onto a flat surface in front of you. The projector senses where your fingers are and interprets the positions as key presses. The advantage is that the mini-projector is smaller than a fold-up keyboard even when it's folded up. A desktop stand with a built-in charger, as these devices take more power, might be just the ticket for working while travelling on business.

Going Past the Keyboard

Of course other input methods might well evolve. Handwriting technology is well established and fine for writing text messages or emails but a longer document might be more tedious and it's not that useful for making spreadsheets and presentations. The same goes for voice input; although smartphones will record speech, they aren't that good at recognition and turning speech into text.

Many people assume that voice input will be the default mechanism for communicating with computers in the future but with the ubiquity of the mobile phone we have already seen the downside of this. It's bad enough having everyone shouting into their phones on the train. If voice recognition kicks off we'll be listening to business travellers trying to explain to their smartphones which column of cells they really wanted their year end figures to go in. Even if voice input did work well, how would you draw a presentation with it?

Screen size is still an issue though. Many spreadsheets are tough to read on a normal screen let alone one that's a twentieth of the size. A number of attempts have been made to bring out 'adapter's that are essentially small laptops that you dock the phone into, thus providing a large screen and keyboard. But to be honest, business travellers might just as well cart a laptop around, and none have taken off yet.

Some experts think that the tiny LED projectors that are just coming to market will soon be incorporated into smartphones. That would give the capability to present information at meetings without a laptop and it would certainly provide a solution for our hotel room scenario too. But it's unlikely that the person opposite a business traveller on a train will be amused when a spreadsheet is beamed at their face.

It would seem that although the gap between large smartphones and small laptops is getting smaller there is still some way to go before the perfect device arrives and the business traveller can discard their laptop. Perhaps it will need another revolution in computer-human interfaces, like the invention of the mouse, to make it happen.