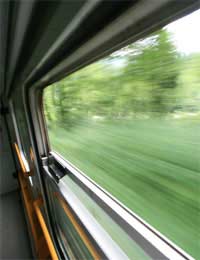 Flying is getting it in the neck at the moment because of the perceived damage to the planet, particularly at the upper layers of the atmosphere. But, of course, business travel is essential, isn't it? Surely it can't be possible to travel the world without flying?

Of course it is always possible to avoid flying but the time penalties cause problems. If time is money, then time spent on business travel needs to be as short as possible so that employees are spending the maximum amount of time doing gainful work. There's no doubt that flying is the quickest way of getting from one place to another once the distance becomes greater than one easily achieved by road or rail.

Business Travel by Flying Within the UK

Taking a look at business travel within the UK, it's not that long since flying for business was the preserve of very rich people. Certainly internal flights weren't at the same level of frequency and weren't as economic as they are now. The shuttle flights between Heathrow and Glasgow and Edinburgh that started up in 1974 were the first internal flights where business travellers could just walk up and board, and the market was ripped open by the arrival of the low-cost carriers in the early 1990s.

Until these changes began to take effect, road or rail were the preferred options for internal travel; rail for journeys between major cities and road for business travellers who needed more flexibility. But the arrival of all these internal flight options suddenly made flying a cheaper choice, and rail still hasn't really caught up.

Business journeys into Europe without flying became easier with the introduction of the channel tunnel and direct trains to Brussels and Paris, and many people in the UK will now use the train for business travel to and from western Europe. This is because it's less hassle at either end than negotiating airports, with their traffic congestion and parking problems at peak times.

Going further on business travel without flying needs a new approach to business though. Edinburgh to Gdansk, for example, would take just over two days, with one overnight stop on a ferry another on a train somewhere in Poland. If you decided to spend the second night in a hotel instead, the journey would take three days.

Now conventional wisdom would say that those two or three days would be wasted on business travel. But with laptop computers, mobile phones and PDAs all available to keep an employee in close contact with colleagues and partners while on business travel, who is to say that the time isn’t wasted?

Crossing oceans for business travel is slightly more problematic. GSM services are now available on many cruise ships and liners, although if you are thinking of taking this option it's worth checking exactly which services are available on the ship you will be using.

The issues are compatibility with your current phone, available speeds, if you are trying to use it for internet connectivity, and roaming charges. Charges in particular are likely to be expensive, but still a lot cheaper than arranging a traditional ship-to-shore call using ship radio.

The change in approach that would be required to make these non-flying alternatives viable is for managers to judge employees on the goals they achieve and the benefits they bring to a business, rather than the time they spend at their desks or in meetings.

There are signs that this shift is on the way, but it's not arrived yet and until then, people with a conscience will have to do their business travel by flying and put up with it.